The first book in the A Horse Called series is set in beautiful Devon and follows the lives of three women.

Their love of all things equine binds them together. Troublesome families and testing relationships
​ threaten the simplicity they each crave and despite their combined strength, things are about to get much worse...

You can read the extract below, or watch the book trailer for A Horse Called Ambition to find out more..

So have you phoned Jules yet?’ Rosie said, as she smoothed Amber’s proud chestnut crest. Gill was contending with Rocky’s eager jigging as the big stallion felt the sheep shorn grass under his bare hooves. She sat easy on the horse, slowly calming him with her secure seat and kind but assertive hands.
‘No.’
‘Bloody hell, Gill, you don’t actually want to fall out properly over this do you?’
‘I know. I just don’t know what to say? She will still think he’s a great boyfriend and I’m not suddenly going to say, ‘Yes he is a great guy, why don’t you marry him,’ am I?’

‘That’s a very negative way of looking at it and you know she doesn’t really think he’s the perfect boyfriend. You need to make up, this is daft. She needs us to support her, not reprimand her for being in love. You know better than anyone you can’t help who you love!’
‘I know, you’re right … it’s just going to be awkward now whatever I do.’
‘Why don’t I have you both round for a girl’s night and dinner next weekend?’
Gill looked down at her gloved hands, which played gently on Rocky's leather reins.
‘Gillian Newman, you’re not twelve.’
‘Okay, yes, that would be good, thank you.’
The horses cleared the tree canopy and they found themselves at the foot of a gentle incline, parkland stretching before them.
‘Little canter?’ Gill grinned at Rosie.
‘Will it just be a canter, or will we end up going flat out?’
‘Oh come on, Amber will look after you!’
With that Gill eased her hold on Rocky and he bounded forward in giant leaps. Amber unsettled Rosie by breaking into a dancing canter without being asked. Rosie clamped her hands towards her body and tensed up without thinking. Amber was used to soft hands and a relaxed jockey. Where she would normally have come sweetly under control and found a rhythm, Rosie's sudden tension unsettled her. She stretched her nose upwards, running away from the unnatural pressure Rosie was inflicting on her. The harder Rosie hauled on the reins to ask the mare to slow down, the more Amber fought, her strides interspersed with half rears. Rosie knew not to pull, knew fighting the mare would only serve to increase her flight instinct, but fear swallowed up her rationale.
Had Gill thought to look back at the pair, she would have seen an ungainly wrestling match ensuing between her frightened friend and her sensitive horse. As they reached the brow of the hill, Gill started to bring Rocky back down to a walk. Rosie quickly steered Amber directly behind Rocky so that she slowed down as he did.
‘There, see that was very dignified wasn’t it?’ Gill was beaming and slapped Rocky's neck in praise for not having shot sideways or exploded into a bucking fit, as he was apt.
Gill turned to see Rosie unusually tight-lipped and Amber looking tense. She decided not to comment.
The rest of the ride was uneventful and by the time they returned to Newmans Rosie had, more or less, relaxed again. Even so, she was hugely relieved to dismount and allow her knees to unlock. Amber looked equally relieved that the ride was over and Rosie quietly apologised to the little mare as she gently slid the saddle from her back.
Rosie hugged Gill goodbye and headed back home to do some training with Red...

To read more of A Horse Called Ambition, purchase the book Here! 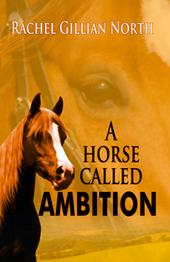